Do you require assistance? Please select from one of the following options:
Self Help

The event recognises outstanding performance by unit trust fund managers in selecting investments for their portfolios, taking into account consistency of returns and management of investment risk. The runners-up in the South African Manager of the Year race – and recipients of certificates – were Investec Asset Management in second place and Prescient in third place. Last year’s winner, Allan Gray, which has dominated the awards in recent years, slipped back to fourth position, while Alexander Forbes Investments was fifth. The Raging Bull Award for Offshore Manager of the Year went to Nedgroup Investments, for its suite of offshore funds domiciled in Ireland (see below). The manager of the year awards are based on the risk-adjusted performance of a company’s suite of qualifying unit trust funds, as determined by the PlexCrown Fund Ratings system, over a five-year period, in this instance to the end of 2019.

Mi-Plan has a best-of-class approach to its funds that are not managed in-house, choosing leading portfolio managers from across the industry. Mi-Plan director Anton Turpin said the awards gave smaller firms the opportunity to show off their investment skills. Speaking to Personal Finance at the event, Turpin said: “It’s an opportunity for smaller managers in South Africa – those companies that don’t have large advertising budgets – to reach investors and tell them about the rewards they can get through good stock selection, good asset allocation and good risk management. These smaller companies have some pretty good asset managers, who have the nimbleness to get in and out of asset classes and stocks when they want to, and achieve for investors what they’re looking for, which is often inflation-beating returns, in a market that has been particularly difficult and that has required a lot of skill. “I am the owner and face of the business, but credit must go to the underlying managers in our best-of-class approach – including Tony Bell, Rowan Williams-Short and Craig MacArthur of Vunani and Guy Monson of Sarasin – who will be happy to know that what they have achieved for our investors, who have put their trust in a company without a major brand, has been recognised.”

The other major awards at the event were fund-specific: four for straight performance over three years and four for risk-adjusted performance over five years, to the end of 2019. In addition to the main awards, 30 certificates were awarded to funds according to their subcategory in the Association for Savings and Investment South Africa classification system for collective investments. The event is hosted annually by Personal Finance, and was sponsored this year by Investment Fund Africa and the JSE. ProfileData and its subsidiary, PlexCrown Fund Ratings, were the data providers.

Investec Asset Management, which has since separated from Investec and is now known as Ninety One, came in only just behind MiPlan, with an average of 4.262 PlexCrowns for its 15 qualifying funds. Of these funds, seven achieved five PlexCrowns (two global funds, two local equity funds, and all three of its multi-asset funds – the Investec Cautious Managed Fund, the Investec Managed Fund, and the Investec Opportunity Fund). Two funds had four PlexCrowns, five had three PlexCrowns and one had a single PlexCrown.

Prescient was third among the unit trust managers, scoring an average of 3.882 PlexCrowns for its 12 qualifying funds. The company’s two top performers, with five PlexCrowns each, were the Prescient Equity Top 40 Fund and the Prescient Balanced Fund. There were five funds with four PlexCrowns, two with three PlexCrowns, and three with a below-par two PlexCrowns.

The second major company award at the gala event was for unit trust companies that are domiciled offshore and whose funds are approved by the Financial Sector Conduct Authority to be marketed to South African Investors. These can be local companieswith offshore divisions or foreign companies. The Raging Bull Award for Offshore Manager of the Year (for performance to the end of 2019) went to Nedgroup Investments. It was the fifth year in a row that Nedgroup has walked away with the award. Nedgroup Investments’s offshore funds are domiciled in Ireland. It had three qualifying offshore funds: the Global Equity Fund, which earned five PlexCrowns, and two multi-asset funds – the Global Flexible Fund (three PlexCrowns) and Global Cautious Fund (three PlexCrowns). The manager’s overall rating was four PlexCrowns.Coronation Global, with 3.667 PlexCrowns across five qualifying funds, and Schroders (3.667 PlexCrowns across four funds) tied for second place in the offshore company rankings. 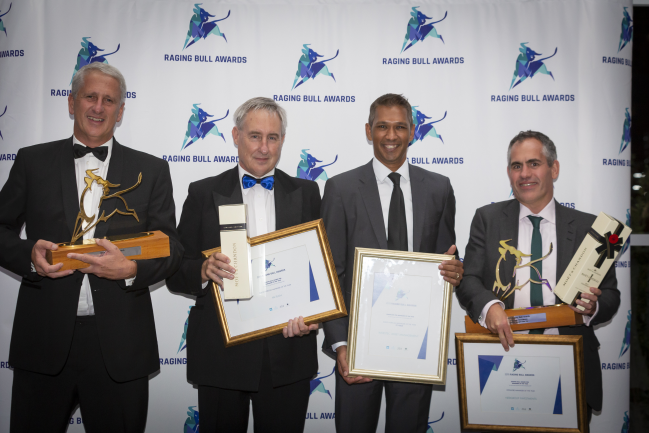 * Returns are annualised if period is longer than 12 months. Annualised returns is the weighted average compound growth rate over the performance period measured.Fund returns shown are based on NAV-NAV unit pricings calculated from INET for a lump-sum investment with income distribution reinvested (after fees and cost).

The Mi-Plan IP Global Macro Fund has a minimum investment requirement of a R10 000 lump sum or a minimum monthly payment of R500.

What does the fund invest in?

The Mi-Plan IP Global Macro Fund is a Multi Asset flexible fund, investing primarily in foreign markets and can invest in equity, fixed interest and cash. The objective of this portfolio is to achieve capital appreciation over the medium to long term. There will be no limitations on the relative exposure of the portfolio to any asset class.

Where can I get a factsheet or a minimum disclosure document?

The factsheet can be obtained from the Mi-Plan website at: http://zamiplanwordpress.azurewebsites.net/choosing-a-fund/#miplan-global-macro-fund .

What are the fees?

The annual management fee of the fund is 1%. For more details regarding the fees of this fund, please view the factsheet: https://www.miplan.co.za/choosing-a-fund/#miplan-global-macro-fund.

Why should I invest now?

The fund allows investors to get exposure to foreign markets while investing in Rands.  However, the South African Reserve Bank limits collective investment scheme providers to invest no more than 40% of their retail assets under management in offshore markets. This may result in the fund closing for new investments in the future.

Can I invest in Rands or must I apply for foreign exchange allowance?

Yes, you can invest in Rands even though the investments in the fund are made on offshore markets.

MiPlan exists to create and preserve wealth through the application of critical thinking. Established in 2006, we assist our clients to manage their money to achieve their desired outcomes through understanding their future income objectives and then creating and managing the wealth required to meet those plans.

Who is the fund manager?

Tony Bell – Having started out as an accountant, Tony moved to Southern Life Asset Management and soon became assistant General Manager of Investments. His move to Syfrets Managed Assets created the opportunity for Tony to become Chief Investment Officer at Nedcor Investment Bank. As CIO of PeregrineQuant and more recently Vunani Fund Managers Tony brings a wealth of experience especially in running the overall asset allocation of the fund. His MBA thesis “Portfolio Management – an Alternative Approach” which was awarded with distinction reflects Tony’s interest in understanding how the macro environment affects markets and asset class returns.

How does the manager select its stock?

There are several factors that need to be considered before investing in a stock, but the primary reason why the stocks are selected is based on earnings growth vectors. The fund manager will pick a stock if its future change in earnings growth is an attractive investment. Asset allocation and stock selection vary according to the manager’s macroeconomic view and the attractiveness of each asset class.

Is the fund always fully invested?

No. The benefit of a flexible fund is that the fund manager does not have to invest 100% of the fund in equity if the manager feels other asset classes are more suitable.